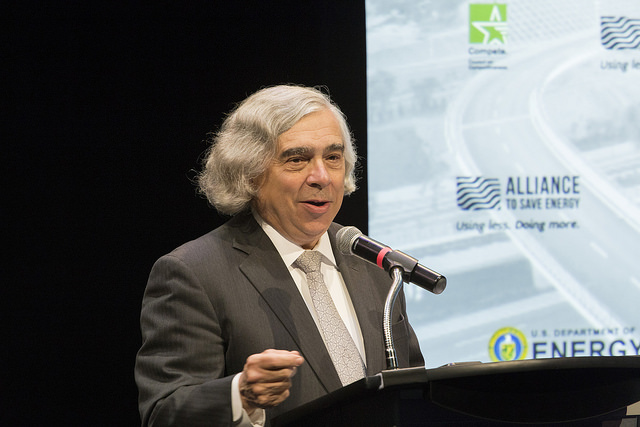 WASHINGTON, D.C. – In support of the President’s goal to double U.S. energy productivity by 2030, Secretary Moniz unveiled a strategic plan today laying out a path businesses, state and local governments, consumers and other stakeholders can use to achieve this goal. The report, Accelerate Energy Productivity 2030: A Strategic Roadmap for American Energy Innovation, Economic Growth, and Competitiveness, identifies proven and effective strategies and actions to advance energy efficiency, including at the state-level securing of energy productivity through setting and updating vehicle and product codes and standards, and providing energy performance information to consumers; introducing rate reform and related policies for utility energy efficiency programs that more effectively align energy efficiency with utility business models; and commercial businesses reinvesting avoided energy costs into growing their businesses. By doubling energy productivity, American families will be able to power their homes using half as much energy, while American businesses will be able to manufacture more while spending less and cutting harmful carbon emissions.

“Cutting energy waste and doubling energy productivity will help American families save money on their energy bills, enable businesses to produce more while using less energy and strengthen the U.S. clean energy economy,” said Energy Secretary Ernest Moniz. “This roadmap provides a path for families, businesses and governments, among others, to follow. By taking steps to increase efficiency and cut waste, the U.S. will be more competitive globally and will see direct and long-lasting benefits for decades to come.”

Alliance to Save Energy President Kateri Callahan said, “Accelerate Energy Productivity 2030 already has fostered dialogues and galvanized action across all sectors of the economy, and with the release of the Roadmap, a broader range of stakeholders and activists now have access to concrete strategies and recommendations on how to achieve impactful and verifiable energy efficiency gains across the country. I am bullish on our prospects for achieving a doubling of energy productivity in the U.S. because it just makes good economic sense. The Roadmap is an actionable blueprint for success that will lead to wide-ranging benefits for American consumers and businesses alike.”

Council on Competitiveness President and CEO Deborah L. Wince-Smith noted, “As the Council’s longstanding work – including this partnership with the Department of Energy and the Alliance to Save Energy – demonstrates, energy is everything. This Roadmap makes the compelling competitiveness case for a doubling of national energy productivity – as an engine for job creation; economic growth; a more globally-competitive manufacturing base; and a greater standard of living for every American.”